How was Europe divided after World War II?

How was Europe divided after World War II?

The Western Bloc, also known as the capitalist bloc, was comprised of countries that adopted capitalist economic systems and aligned with the United States. These countries included the United Kingdom, France, Italy, West Germany, and the Benelux countries (Belgium, the Netherlands, and Luxembourg). The Western Bloc countries also formed the North Atlantic Treaty Organization (NATO), a military alliance formed in 1949 to counter the military power of the Soviet Union and its Eastern Bloc allies.

The Eastern Bloc, also known as the communist bloc, was comprised of countries that adopted communist economic systems and were aligned with the Soviet Union. These countries included the Soviet Union, Poland, Czechoslovakia, Hungary, Romania, Bulgaria, and East Germany. The Eastern Bloc countries also formed the Warsaw Pact, a military alliance formed in 1955 as a counterweight to NATO.

The division between the Western and Eastern Blocs was often referred to as the 'Iron Curtain,' a term first used by Soviet leader Joseph Stalin in a speech in 1946. The Iron Curtain referred to the physical and ideological divide between the capitalist and communist worlds. It separated the Western Bloc countries from the Eastern Bloc countries and was enforced by border controls, censorship, and propaganda. 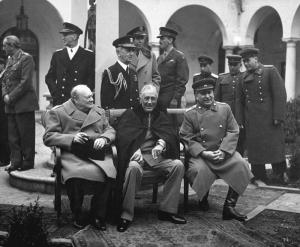 One of the most visible and iconic symbols of the division between the Western and Eastern Blocs was the Berlin Wall. The East German government erected the wall in 1961 to prevent the free movement of people between East and West Berlin. The wall stood for 28 years until it was finally torn down in 1989, marking the beginning of the Cold War's end and Europe's division.

Fall of the Eastern Bloc

The division of Europe after World War II lasted more than four decades. However, the Eastern Bloc began to crumble in the late 1980s and early 1990s. This was due to a combination of economic, political, and social factors, such as economic stagnation and popular protests against communist governments. The fall of the Berlin Wall in 1989 symbolized the collapse of the Eastern Bloc, and by 1991, the Soviet Union had collapsed. Democratic ones had replaced the communist governments of Eastern Europe.

Europe was divided into two main political and ideological blocs after World War II, the Western Bloc and the Eastern Bloc. The Iron Curtain enforced the division and symbolized the Berlin Wall. The Eastern Bloc collapsed in the late 1980s and early 1990s, marking the end of the Cold War and the division of Europe.