What is the Ashgabat agreement? Why didn't India join it?

What is the Ashgabat agreement? Why didn't India join it?

The Ashgabat Agreement is a multimodal transport agreement signed by the governments of Kazakhstan, Uzbekistan, Turkmenistan, Iran, Pakistan, India, and Oman to establish an international transport and transit corridor facilitating goods transportation between Central Asia and the Persian Gulf.

The Ashgabat Agreement is an international transport and transit corridor that allows goods to be transported between Central Asia and the Persian Gulf.
The goal of the Ashgabat Agreement is to create the shortest trade route between Central Asian countries and Iranian and Omani ports. The transit agreement calls for a transit corridor to run through Central Asia and the Middle East, passing through Kazakhstan, Uzbekistan, Turkmenistan, and Iran before reaching the Persian Gulf and Oman.

The agreement will also provide for the development of infrastructure and facilities for the transport and transit of goods and passengers. The Ashgabat agreement is a part of the larger process of integration of the Central Asian region. The agreement will contribute to the economic development of the region and will create new opportunities for trade and investment. The Ashgabat agreement is an important step towards the realization of the vision of Central Asia as a land-bridge between Europe and Asia. 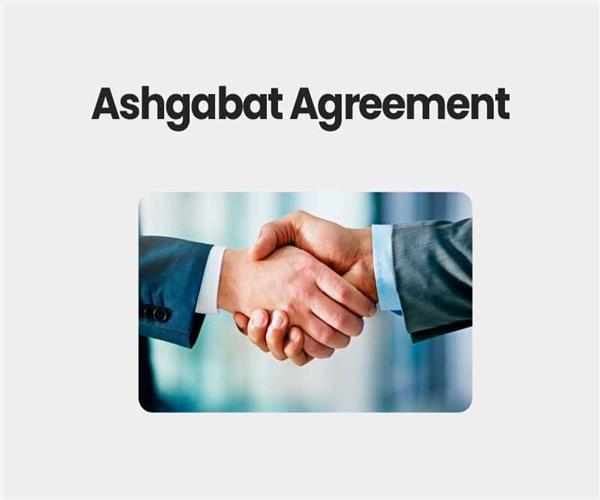 India was initially reluctant to join the project due to the security situation in Afghanistan. However, India decided to join the project in 2011 after getting assurances from the Afghan government about the security of the pipeline. The agreement was finally signed after years of negotiations between the four countries. India deposited the instrument of accession with Turkmenistan in 2016, and its accession to the agreement was approved by the founding members of the Ashgabat Agreement on February 1, 2018.

The Ashgabat agreement is a major step forward in the region's energy security. It will help the four countries to reduce their dependence on imported energy. The project is also expected to boost the economies of the four countries.