How Elon Musk became the first person to lose $200 billion?

How Elon Musk became the first person to lose $200 billion?

According to the Bloomberg Billionaires Index, Elon Musk, 51, has seen his worth drop to $137 billion as a result of the recent decline in Tesla stock, which included an 11% decline on Tuesday. Elon Musk, the founder and CEO of SpaceX and Tesla, has been one of the world's wealthiest individuals for several years. However, in recent weeks, his net worth has taken a significant hit, with his fortune dropping by over $200 billion according to the Bloomberg Billionaires Index.

The decline in Tesla Stock Price:

A large part of Musk's wealth comes from his stake in Tesla, which is the largest publicly-traded company in the world. In recent weeks, the stock price of Tesla has dropped significantly. There are several factors that have contributed to this decline, including increased competition in the electric vehicle market, concerns about production and delivery delays, and rising interest rates.

Tesla has also been facing regulatory challenges in China, where it is trying to build new factories. The Chinese government has been increasingly restrictive with foreign companies, and there are concerns about the ability of Tesla to expand its presence in the country. The Chinese market is critical for Tesla's growth as it's the largest market for electric vehicles.

Another significant factor that may have contributed to the decline in Tesla's stock price is the recent erratic behavior and tweets from Musk. Some investors have become concerned about the CEO's erratic behavior, with some calling for him to step down or for the company to be more transparent about its operations.

Musk's other ventures, like SpaceX, Neuralink, and The Boring Company also have financial demands, Musk's vision and ambitious plans are very capital-intensive, which might have impacted his wealth. Another important factor that has contributed to the decline in Musk's net worth is the rising bond yields, which have made Tesla's bonds less attractive to investors. As interest rates have risen, the value of Tesla's bonds has decreased, which has further impacted Musk's net worth. 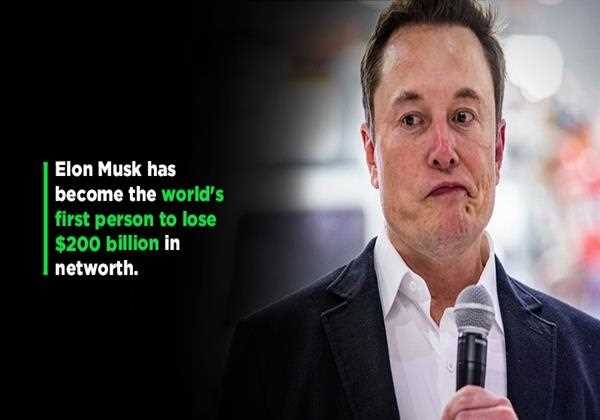 Furthermore, some experts have pointed out that the recent drop in Tesla's stock price could be a sign of a broader market correction, as investors are becoming increasingly cautious about the outlook for the global economy, particularly in light of the ongoing uncertainty caused by the COVID-19 pandemic. This is also having an impact on the overall market, with most of the companies' stocks going down, and this is also affecting Musk's wealth.

Overall, while the recent decline in Musk's net worth is significant, it is important to keep in mind that it is largely tied to the value of Tesla, a company that is still growing and innovating in the electric vehicle market, and also his other ventures have the potential to bring in significant returns in the future. Additionally, it's worth noting that the stock market is highly volatile and changes in a matter of days or even hours.

In conclusion, there are several factors that have contributed to the decline in Elon Musk's net worth, including a drop in the stock price of Tesla, regulatory challenges in China, and concerns about Musk's erratic behavior. While the decline in Musk's wealth is significant, it is important to note that it is also largely tied to the value of Tesla, a company that is still growing and innovating in the electric vehicle market, and Musk's other ventures have the potential to bring in a significant return in the future.