Should we have captured our PoK during the 1971 Indo-Pak war?

Should we have captured our PoK during the 1971 Indo-Pak war?

On the morning of December 3, 1971, the Pakistani army began its final offensive against India. The aim was to capture the Indian-held territory of Kashmir and thus avenge the defeat of Pakistan in the 1965 war. The offensive was launched from three directions - the Chamb sector in the west, the Tithwal sector in the north, and the Uri sector in the east.

The Indo-Pakistani War of 1971 was a watershed moment in the history of the subcontinent. The conflict resulted in the largest military surrender since World War II and led to the largest forced migration in world history. The war also resulted in the birth of Bangladesh.

The question that arises is - should the Indian army have captured the Pakistani-held territory of Kashmir during the 1971 war?

There are a few reasons why the Indian army did not capture the Pakistani-held territory of Kashmir during the 1971 war. 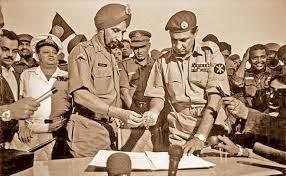 Ultimately, the decision of whether or not to capture PoK during the 1971 war was a political one, and it is impossible to say definitively whether or not it was the right decision. However, it is clear that the war had a profound impact on the region, and that its consequences are still being felt today.