What is the idea behind using the lotus logo in the G20 Summit?

What is the idea behind using the lotus logo in the G20 Summit?

On Tuesday, Prime Minister Narendra Modi unveiled India's G20 logo, theme, and website. The logo depicts a lotus flower and the message 'Vasudhaiva Kutumbakam — One Earth, One Family, One Future.'

The lotus is a symbol of purity, serenity, and beauty in many cultures around the world. The lotus flower grows in muddy water and yet emerges pristine and unstained.

The lotus has been used as a symbol of peace and non-violence in many religious and spiritual traditions. In Buddhism, the lotus is a symbol of enlightenment, while in Hinduism it is a symbol of divine beauty and purity.

The lotus is also a symbol of the G20 Summit, which is an annual meeting of the world's 20 largest economies. The lotus logo was first used at the 2009 G20 Summit in London.

The lotus logo was chosen to represent the G20's commitment to global economic recovery and growth. The lotus also symbolizes the G20's hope for a more peaceful and stable world.

The G20 Summit is a forum for discussion and action on the world's most pressing problems. The lotus logo reminds world leaders that they must work together to find solutions to the challenges facing the world today.

'The world is dealing with the aftermath of a disruptive once-in-a-century pandemic, conflicts, and a great deal of economic uncertainty.' The lotus symbol in the G20 logo represents hope in these difficult times. 'Regardless of the circumstances, the lotus blooms,' Prime Minister Modi said.

The Prime Minister elaborated, saying that the logo reflects our idea of Vasudhaiva Kutumbakam (the entire earth is a family), which is why India has always believed in global harmony. 'The lotus flower represents our Puranic heritage, our aastha (belief), and our boddhikta (intellectualism,' he explained.

On December 1, India will take over the presidency of the powerful G20 grouping from the current chair, Indonesia, for a year. The G20 Leaders' Summit at the Heads of State/Government level is scheduled for September 9 and 10, 2023, in New Delhi. 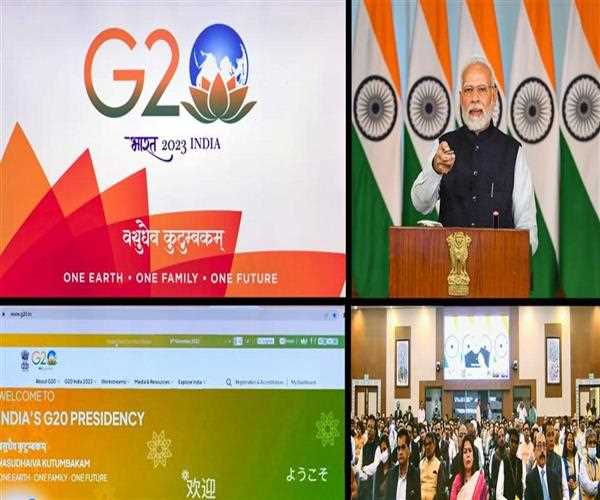