Which Indian king had the biggest empire in history?

Which Indian king had the biggest empire in history?

The Mauryan Empire was the largest Indian dynasty ever created, and it was founded by a man named Chandragupta Maurya. The Mauryan Empire was in existence from around 322 BC to 185 BC, and it was one of the most powerful empires of its time. The empire was notable for its highly centralized government, its expansive military, and its achievements in architecture and engineering.

At its peak, the Mauryan Empire stretched from the Himalayas in the east to the Bay of Bengal in the west, and from the Indo-Gangetic Plain in the north to the Deccan Plateau in the south. Chandragupta Maurya and his successors conquered most of India, forming a vast empire that was at its height the largest in the world. The empire reached its peak under Emperor Ashoka, who ruled from 273 BC to 232 BC. Under Ashoka, the empire became a bastion of Buddhist culture and learning, with many major temples and universities built in its territories. Ashoka also encouraged the spread of Buddhism into neighboring countries, helping to cement the empire's influence and power.

Chandragupta Maurya was a highly successful military leader, and he was able to unite most of the Indian subcontinent under his rule. The Mauryan Empire was also known for its great achievements in art and literature, and its rulers were considered to be some of the most accomplished military leaders of their time.

Under Chandragupta's leadership, the Mauryan Empire rapidly expanded its territory. By 233 BCE, the empire had reached its peak size and controlled a vast area of land. Chanakya ministers formulated the empire's policies and laws, allowing the empire to thrive. The empire also signed treaties with Alexander the Great's generals after conquering territories in Iran and Afghanistan. The Empire had conquered most of the Indian subcontinent during the reign of Ashoka, Chandragupta's grandson. Furthermore, after the conquest of Kalinga, Ashoka was well-known for embracing and reestablishing Buddhism. Chandragupta's son, Ashoka, continued the empire's expansion and eventually became the most powerful ruler in India. Ashoka was a devout Buddhist and devoted himself to the welfare of his subjects.

The Mauryan Empire was a major cultural and political force in its time. It greatly influenced the development of Indian society and culture, including the development of the Indian language and literature. The empire also played a significant role in the spread of Buddhism across India.

The Mauryan Empire eventually fell to the rise of the Gupta Empire, but the legacy of the Mauryan Empire continued to be felt for centuries afterward. The empire's influence can still be seen in present-day India, where it is still regarded as one of the most powerful and influential empires in world history. 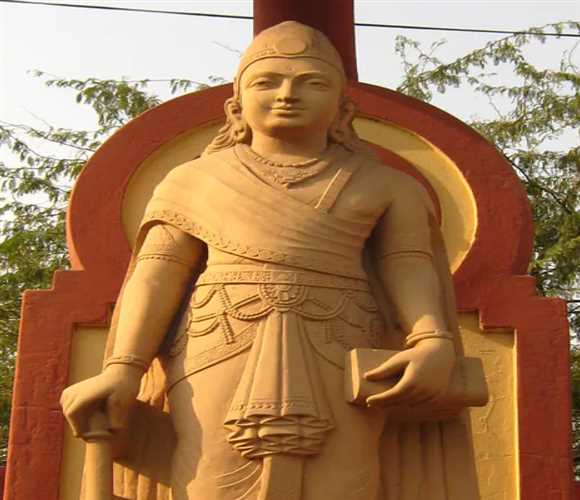