What is the difference between "freedom" and "liberty"?

What is the difference between 'freedom' and 'liberty'?

When it comes to political thought, the terms 'freedom' and 'liberty' are often used interchangeably. However, there is a subtle but important distinction between the two concepts.

At its core, freedom is the absence of constraint. It is the ability to act without interference from others. Liberty, on the other hand, is the power to act freely within the confines of the law. In other words, liberty is the freedom to do what the law allows.

This distinction is important because it highlights the fact that freedom is not necessarily the same as anarchy. An anarchic society would be one in which there are no rules or laws, and thus everyone would be free to do as they please. This is not necessarily a good thing, as it could lead to chaos and disorder. A society that values liberty, on the other hand, recognizes that there need to be some limits on freedom in order to maintain order and protect individual rights.

The United States is founded on the principles of liberty. The Declaration of Independence proclaims that 'all men are created equal' and have the 'unalienable rights' of 'life, liberty, and the pursuit of happiness.' These rights are not absolute; they are subject to the limitations of the law. But the fact that they are subject to limitations does not make them any less valuable. In fact, it is precise because these rights are not absolute that they are so important.

The framers of the Constitution understood this distinction between freedom and liberty. They enshrined the latter in the document while reserving the former for the individual states. This is why the First Amendment protects the right to free speech, but not the right to engage in anarchy.

Similarly, the Founding Fathers recognized that a government that is too powerful can be a threat to liberty. That is why they divided the powers of the federal government among three branches: the executive, the legislature, and the judiciary. This system of checks and balances ensures that no one branch can become too powerful and usurp the rights of the people.

In conclusion, freedom and liberty are two important but distinct concepts. Freedom is the absence of constraint, while liberty is the power to act freely within the confines of the law. Both are essential to the American way of life. 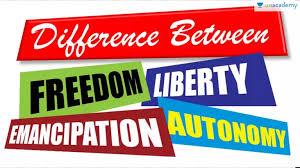 In our everyday lives, we use the words 'freedom' and 'liberty' interchangeably. However, there is a big difference between the two concepts.

'Freedom' is the ability to do what you want, without interference from others. It is the absence of constraints or limitations. 'Liberty' is the power to choose how you will live your life, within the limits of the law.