Why do rainbows appear only after rainfall?

Why do rainbows appear only after rainfall?

A rainbow is a meteorological phenomena that appears in the sky as a spectrum of colours as a result of light reflection, refraction, and dispersion in water droplets. It appears as a circular arc with several different colours. Sunlight-induced rainbows are always visible in the part of the sky directly across from the Sun.

Full circles can form in a rainbow. However, the average observer only sees a single arc, which is focused on a line from the Sun to the observer's eye and generated by lit raindrops above the ground. Rainbows are one of the most beautiful natural phenomena. They are also a great mystery.

Why do they only appear after rainfall?

This is a question that has puzzled scientists for centuries. The answer, it turns out, is quite simple. Well, it has to do with the size of the water droplets. During a rain shower, the water droplets are much larger than during other times of the day. This allows for more sunlight to be refracted, and thus, creates a more vibrant and beautiful rainbow.

Following a downpour, raindrops are suspended in the air. When a light ray enters one of the drops, the drop transforms into a prism and splits into its component colours as dispersion occurs. Raindrops emit a variety of coloured lights, including violet at the bottom and red at the top. A rainbow results as a result.

So the next time you see a rainbow, remember that it is created by the sun reflecting off of water droplets. And be thankful for the rain!

Red, orange, yellow, green, blue, and violet are all colours of the rainbow that can be found in sunlight. A water droplet, on the other hand, slows down and bends when sunlight strikes it. This happens as a result of the many hues of sunlight being bent at different angles by the water droplet, which functions as a miniature lens. The least bent colour of light is red, and the most bent colour is violet. Because of this, the colours at the top and bottom of the rainbow are typically red and violet, respectively. 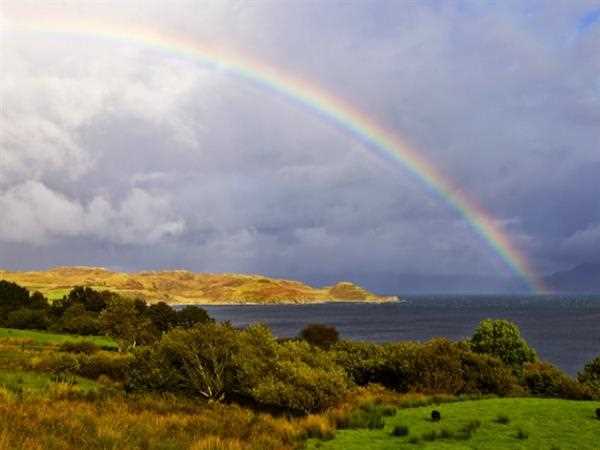