What is article 35A and who can challenge it in the Supreme Court?

What is article 35A and who can challenge it in the Supreme Court?

The Indian Constitution is the country's highest law. It establishes the framework for defining fundamental political principles, as well as the fundamental rights, guiding principles, and responsibilities of citizens. It also lays out the structure, operations, and powers of governmental institutions. With its 448 articles divided into 22 parts, 12 schedules, and 118 amendments, it is the longest constitution in the world.

The article has been a source of tension between India and Pakistan, as it is seen as giving preferential treatment to the people of Jammu and Kashmir. Pakistan has repeatedly called for the article to be repealed, and has even threatened to take the matter to the International Court of Justice.

The Indian government has so far refused to repeal the article, arguing that it is an important part of the country's constitution. Any change to the article would require a two-thirds majority in parliament, which the government does not currently have.

The article has been challenged numerous times in the Supreme Court, but has so far been upheld. The most recent challenge was in 2018, when the petitioners argued that the article was unconstitutional as it violated the right to equality and the right to freedom of movement. The Supreme Court is yet to give a verdict on the matter.

Opponents of the article argue that it is discriminatory and creates a permanent underclass in Jammu and Kashmir. They also argue that it violates the right to equality guaranteed in the Constitution.

Supporters of the article argue that it is necessary to protect the unique cultural identity of Jammu and Kashmir. They also argue that the article does not violate the right to equality, as it only applies to permanent residents of the state.

The Supreme Court is currently hearing a challenge to the article, and is yet to give a verdict.

Ram Nath Kovind, the Indian president, issued a new presidential order on August 5, 2019, which made all Indian Constitutional provisions applicable to the State without the need for any additional clauses. This implied that the State's separate Constitution, along with the privileges granted by Article 35A, stood invalid. 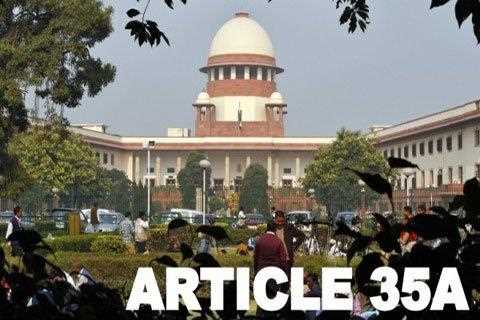