How is a model Hindu-Muslim town in the UK burnt with hatred?

How is a model Hindu-Muslim town in the UK burnt with hatred?

It's a story that's all too familiar in the United Kingdom. A town where Hindus and Muslims have lived side-by-side for generations is suddenly plunged into violence, with homes and businesses set ablaze by mobs of angry youths.

The town of Leicester is the latest to be hit by such unrest, with reports of shops and homes being attacked and set on fire. As the BBC reports, 'a number of Asian-owned businesses were set alight, including a petrol station, a takeaway and a clothing store.'

The violence erupted after a local man, Imran Farooq, was stabbed to death. Farooq was a member of the local Muslim community, and his murder has been blamed on tensions between the two groups.

Witnesses say that a group of around 50 people, mostly young men, went on a rampage through the streets, attacking anyone they saw as they shouted 'Allah Akbar'.

The town's Hindu residents say they are living in fear, and many have fled their homes. 'I don't feel safe here anymore,' one man told the BBC. 'I'm scared to leave my house.'

The unrest has sparked condemnation from across the political spectrum, with Prime Minister Theresa May calling it 'completely unacceptable'.

'There can be no justification for this violence and it must be stopped immediately,' she said. 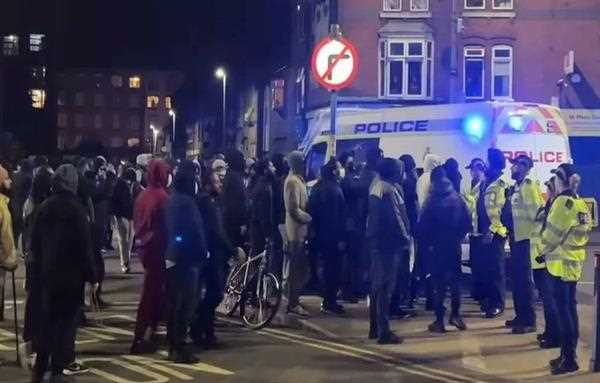 , has also condemned the violence, saying that 'there is no place for this in our city'.

'We have a long history of successful community relations here in Leicester and will not allow a minority to spoil that,' he said.

The violence in Leicester is just the latest in a string of attacks on Hindu and Muslim communities in the UK. In June, a man drove a van into a group of Muslims outside a mosque in London, killing one person and injuring several others.

And in July, a Hindu temple in London was vandalized and set on fire, leading to a number of arrests.

The UK has seen a rise in hate crimes in recent years, with the number of reported incidents increasing by almost a third in the last year.

Many have blamed the rise in hate crimes on the divisive rhetoric of politicians like US President Donald Trump and British politicians such as Nigel Farage.

But whatever the cause, the violence in Leicester shows that the UK is still a long way from being the model of religious tolerance that it likes to think it is.