The world's largest canal lock has recently been unveiled in which country?

The world's largest canal lock has recently been unveiled in which country?

The world's largest canal lock was opened at Ijmuiden, a tiny port city in the Port of Amsterdam, The Netherlands.

The infrastructural project, which is 500 meters long and 70 meters broad, provides Amsterdam with a 'larger front entrance.' It also took 3 years more and cost around €300 million much more than anticipated. 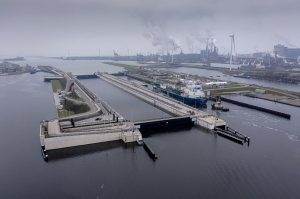 The Dutch King, Willem-Alexander, unveiled the globe's biggest canal lock on Wednesday. The major infrastructure project's development started in 2016 and was supposed to be completed by 2019. It also exceeded the original budget by roughly €300 million.
The Ijmuiden lock was built to allow large, contemporary cargo ships to approach Amsterdam's port. The construction is also deep enough that ships would no more need to stop for a suitable water level to reach the canal. With a height of nearly nine meters above sea level, the building also serves as a flood defense. Locks are used to making a river more navigable or to allow a canal to cross uneven terrain. Later canals employed ever bigger locks to provide a more direct path.
Add comment
answered 07-Feb-2022 by Anonymous User