What is the name of the semi-high-speed railway project being constructed in Kerala?

What is the name of the semi-high-speed railway project being constructed in Kerala? 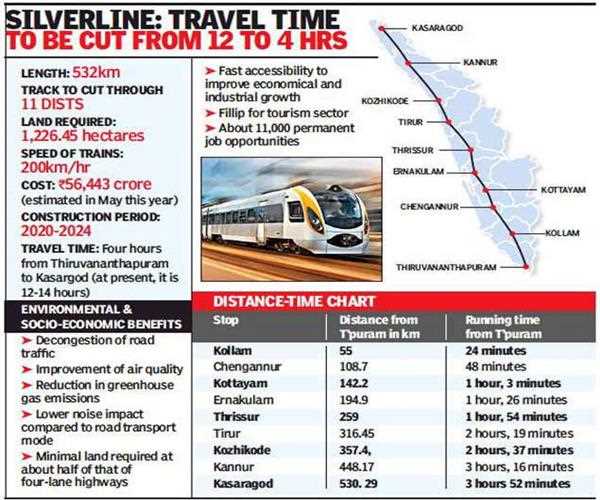 The Thiruvananthapuram–Kasaragod Semi High-Speed Rail Corridor, commonly known as the Silver Line, is a proposed high-speed railway in India that would link Thiruvananthapuram, Kerala's capital city, with Kasaragod, also in Kerala. It will move at a speed of 200 kilometers an hour, enabling trains to complete the 532-kilometer journey in much less than 4 hours, compared to the present period of 10 to 12 hours. The stations in this corridor will be Thiruvananthapuram, Kollam, Chengannur, Kottayam, Ernakulam, Nedumbassery Airport, Thrissur, Tirur, Kozhikode, Kannur, and Kasaragod.

Read More: The famous Integral Coach Factory(ICF) for the manufacture of railway coaches are situated at.
K-Rail, a joint venture corporation between the Ministry of Railways and the Government of Kerala, is preparing the project's Detailed Project Report. The railway line intends to reduce traffic congestion between the state's northern and southern areas, while simultaneously decreasing travel times and combating climate change. The project comprises a roll-on/roll-off (RORO) rail service that transports road vehicles as well as improved feeder public transportation services from stations. However, the proposed use of Standard Gauge instead of Broad Gauge will limit the line's Ro-Ro capacity.
Add comment
answered 01-Feb-2022 by Anonymous User