How much money did India have after independence?

How much money did India have after independence? 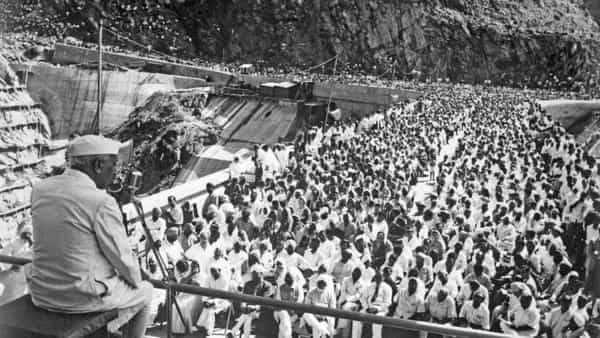 India celebrated its 73rd Independence Day on 15th August 2019. Its development journey over the last 72 years has been marked by significant milestones and reforms that enabled it to attain substantial progress in many areas including rise in income levels, growth, literacy, life expectancy and a wide variety of other economic indicators. As India commemorates 72 glorious years as an independent nation, let’s recall at a number of the numerous achievements of our economy over the years.
Incomes expand 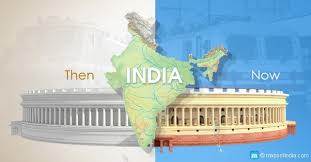 Since 1947, India has achieved tremendous progress in raising growth, income levels and standards of living. The gross domestic product (GDP) increased from Rs 2,939 billion during 1950-51 to Rs 56,330 billion during 2011-12 (2004-05 constant prices). In 2018-19, India’s GDP was valued at an estimated Rs 1,40,776 billion (2011-12 constant prices).
At the same time, the average Indian citizen earned an income of just around Rs 7,513 during 1950-51 which increased to Rs 41,255 during 2011-12 (2004-05 constant prices) and further to Rs 92,565 during 2018-19 (2011-12 constant prices). The per capita income increased in real terms despite a big increase in the population of the country.
Agriculture and allied sectors boom
The agricultural sector continues to be a vital sector in the Indian economy and generates livelihood for quite half the population. The real gross value added by the agriculture, forestry and allied sectors went up from around Rs 1,502 billion in 1950-51 to around Rs 22,263 billion as per the 2011-12 calculations.
The advent of the revolution during the 1960s was a game-changer for the country. It saw the adoption of modern technology and methods to produce high yield variety seeds, that significantly raised agricultural productivity and increased food grain production.
The net production of food grains in India increased from around 48 million tonnes during the 50s to a massive 241 million tonnes during 2017. India continues to be one among the most important producers of rice, wheat and various fruits and vegetables within the world and is additionally the leader in milk production.
Industry diversifies 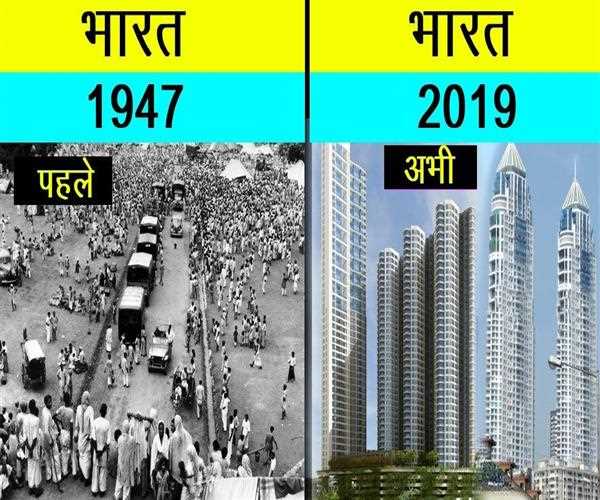 India has also made significant strides in terms of commercial development since Independence. The Industrial Policy of 1991 constituted a serious economic reform and was introduced to reinvigorate the economic sector. The policy dismantled the system of commercial licensing and opened the world for greater private sector participation also as foreign investment.
In terms of real gross value added, manufacturing, construction and electricity, gas and water system sector stood at around Rs 401 billion during 1950-51. Presently, the world is valued at around Rs 36,684 billion (2011-12 series).
Many sectors gained pace in the manufacturing scenario. From just 3 automobile companies, the automotive sector attracted global multinationals and built up a variety of products of worldwide quality standards. In pharmaceuticals, India is now a major producer and undertakes research to develop new drugs. Engineering and electrical machinery goods have evolved to global benchmarks also .
In services, new sectors such as Information Technology and telecommunications have transformed the landscape, creating new opportunities such as e-commerce and start-ups. India’s IT skills are renowned the world over.
Conventional services industries have also expanded, with financial services, tourism and hospitality, and retail changing in multiple ways, adapting to technology and gaining share within the economy. The true GVA(gross value added) for the services sector comprising of trade, hotels, transport and communications increased from around Rs 308 billion during 1950-51 to Rs 14,023 billion during 2011-2012 (2004-2005 sequence) and is estimated at around Rs 24,711 billion during 2018-19 (2011-12 sequence).
Building India
India has also made significant headway in infrastructure and has worked over the years to establish a robust transport network. The size of roads enlarge from around 0.4 million km during the 1950s to around 5.9 million km post 2016-17.
Length of national and state highways have also increased substantially while the number of registered vehicles has gone up from 0.31 million during 1950-51 to around 253 million during 2016-17. Aeronautics has also witnessed immense growth, with number of passengers increasing from only 10.74 million during 1980-81 to an estimated 345 million during 2018-19.
India’s energy sector has also diversified significantly and made substantial progress since Independence. The total power generated by the hydro, thermal and nuclear sectors increased from only 5.1 billion KWH during 1950-51 to 1,303.5 billion KWH during 2017-18. India’s established plant capacity went up from a mere 2.3 thousand MW during 1950-51 to 399 thousand MW as of 2017-18.
Converging with the world
The process of liberalization that was started during the mid-1980s to form the Indian economy more hospitable trade and external flows gained pace during the 1990s. The objective was to enhance the efficiency of the Indian economy through reduction in trade barriers like import tariffs.
Today, India has developed a significant footprint in the global economy. The value of exports of goods and services stood at just around USD 0.1 billion during 1950-51 while merchandise exports was valued at USD 330 billion in 2018-19. In services exports, India has emerged as the top exporter of IT services.
Development progresses
India has also come an extended way in terms of improving its human development indicators. Literacy Rate have improved significantly, from 18.3% during 1950s to 52% during 1990s to 73% during 2011.
This has been accompanied by major improvements in other socio-economic indicators such as increase in the gross enrolment ratios in school and rise in the number of recognized educational institutes in the country, among others.
Households’ access to safe beverage at the all-India level improved from 81.4% during 1991 to 91.4% during 2011. In healthcare, the arrival of sophisticated and modern technology has led to reduced prevalence of diseases and increased longevity.
Promise of the future
The reform pace continues at a quick pace with major reforms like the introduction of the landmark Goods and Services Tax, the Insolvency and Bankruptcy Code, and simple Doing Business reforms, among many others, being introduced. All these promise to contribute to an ever growing and ever evolving economy and spur further economic process . India@75 is that the new problem on which the country has set its sights, the year 2022 when it completes 75 years of Independence. The Indian growth story continues because it celebrates yet 1 more glorious year as an independent nation.
Add comment
answered 02-Sep-2020 by Palak Anjum