Which phenomenon leads to the mirage in deserts?

Which phenomenon leads to the mirage in deserts?

“Total Internal Reflection of Light” (TIR) is the basic phenomenon responsible for the formation of Mirage in Desert or Sea or on roads. 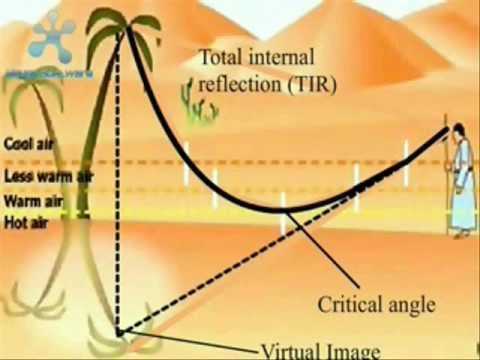 Mirage especially formed during noon hours in the summer season. In mirage formation usually, people get to experience the illusion of Water or Oasis in the desert area or roadside, and can also the inverted image of animal-like Camel or trees in Desert area and Ship or boat in Sea. All these, occurrences are named under different cases of Total Internal Reflection.
Basically, the Mirage is formed when the land area gets heated and then the layer of air above it also get heated. Then the light rays coming to the surface under that situation bent or refracted upward direction. This occurs because light travels fast in warmer, less dense air than in denser cold air. This fast movement of light rays speeds ahead of the upper part, cause it to bend upward or refracted.
In this process, when the refracted light meets to that person’s eyes, it forms an illusion that you are seeing the sky or water, not the road surface or the desert. The reflected light ray follows a similar path, therefore the refracted ray is considered as a reflected light ray and hence the ‘Mirage’ is seen.
The Total Internal Reflection phenomenon is also applied in Optical Fibre, Single Lens Reflex Camera, and Binocular Telescope. In Total Internal Reflection, the Incident Angle is larger than the Critical Angle.
Inferior Mirage: Image is formed when the air above the point of eye contact has lower temperature then the surface, in this way, Inferior Mirage is formed. Example: Mirage formed at Deserts, and Highways.
Superior Mirage: Image is formed when the air above the point of eye contact has high temperature than the surface, in this way, a Superior Mirage is formed. Example: Mirage formed at Oceans and Rivers.
Add comment
answered 19-Apr-2019 by Anonymous User