Lenin’s Mausoleum was the holy shrine of the Lenin cult during the Soviet era. Stalin, and other Soviet leaders have a tomb behind the mausoleum, other important Soviets were buried in the Kremlin wall. Visiting the mausoleum and Kremlin wall necropolis is still a special occasion today, even though many of the buried people are controversial to say the least. 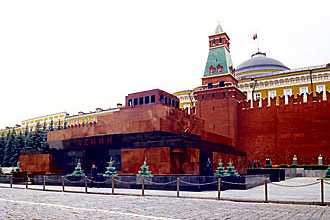 After Lenin’s death in 1924 it was decided to embalm his body and display it in a mausoleum to allow all Russians to say goodbye to their leader. A wooden structure was build by the Kremlin wall on Red Square. By 1929 the body was still on display in the wooden building and new preservation methods were known to scientists by then. It was decided to build a new stone mausoleum that was finished in 1930. Lenin’s body was moved to Siberia in 1941 fearing that the Germans would take Moscow and get their hands on his remains. A new stone sarcophagus was constructed in 1972, nothing else changes since then. Stalin was placed besides Lenin from 1953 to 1961 when he fell out of favour and was reburied in a tomb with bust at the Kremlin wall with other famous Soviet statesmen like Kalinin, Frunze, Dzerzhinsky and later Andropov, Chernenko and Brezhnev. The mausoleum was guarded by the Guard of Honour called the Number One Sentry until 1993, from then the Moscow police took over this task. 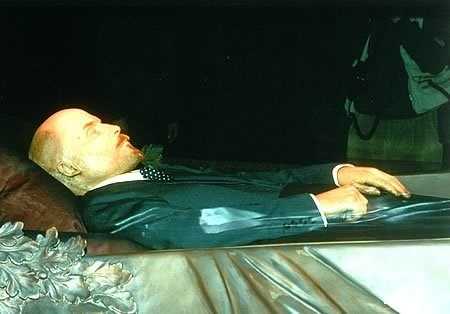 It was Stalin’s decision to preserve Lenin’s body; he wanted to take communism to the next level and believed that it would be a good way to harness the religious sentiment of the nation’s masses for his support. The job of embalming Lenin’s body was given to scientist Boris Zbarsky, whose family is still responsible for preserving Lenin’s body today. This is not an easy task and requires daily work to moisturize the features and inject preservatives under the clothes. Rumours have been going around for years that the body displayed in the mausoleum is in fact a wax doll and that the real Lenin in stored in a freezer. The Zbarsky franticly deny this and claim that visitors are looking at the real thing.
The Mausoleum is open to the public on selected days of Tuesday, Wednesday, Thursday, Saturday and Sunday from 10:00 to 13:00, except holidays per the Moscow Marriott Grand concierge as of August 11, 2015. Visitors still wait in lines to see Lenin's body although they are not as long as they once were. Entrance is free of charge. Before visitors enter the mausoleum, armed police or military guards search them. Visitors are required to show respect while in the tomb: photography and videotaping inside the mausoleum are forbidden, as is talking, smoking, keeping hands in pockets, or wearing hats (unless female).
Add comment
answered 12-Mar-2018 by Shreyas Tandon