What is the name of the cells in the body that engulf foreign particles like bacteria?

The cells in the body that engulf foreign particles like bacteria are called phagocytes. Phagocytes are a type of white blood cell that plays a crucial role in the immune system. They are responsible for identifying, attacking, and eliminating foreign invaders, such as bacteria and viruses, from the body. There are several different types of phagocytes, including neutrophils, monocytes, and macrophages, which are all part of the body's first line of defense against infection.

Phagocytes kill bacteria and other foreign invaders in a process called phagocytosis. When a phagocyte encounters a foreign particle, it extends pseudopodia (false feet) around the particle and engulfs it. The phagocyte then encloses the particle in a membrane-bound vesicle called a phagosome. The phagosome then moves to the center of the cell and fuses with a lysosome, which is a vesicle that contains enzymes that can break down the engulfed particle. The enzymes in the lysosome digest the particle and kill it, and the waste products are then expelled from the cell. This process is an essential part of the body's immune response and helps to keep us healthy by eliminating harmful foreign invaders.

Here are some additional points about the process of phagocytosis: 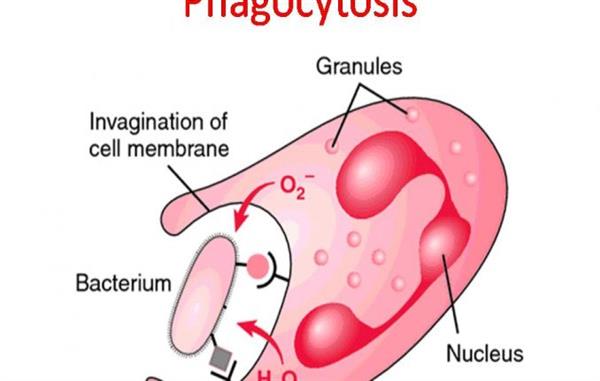