Fundamental Rights of the citizens are?

Please log in or register for appropriate action.
0 votes
642 views
asked 10-Mar-2018 in indian Polity and Constitution by Anonymous User

Fundamental Rights of the citizens are?

Please log in or register to vote.
0 votes
answered 24-Jan-2019 by Anonymous User
Originally, there were 7 Fundamental Rights in the Indian Constitution. But after the 44th Amendment in the Constitution in 1978, causes the removal of ‘Right to Property’. Because the right causes a lot of problem in attaining the goal of Socialism and Equal Distribution of Wealth. Whereas, the ‘Right to Education’ is added as the fundamental right in the year 2002 under the 86th Constitutional Amendment. So, overall the 7 basic Fundamental Rights of an Indian Citizen are: 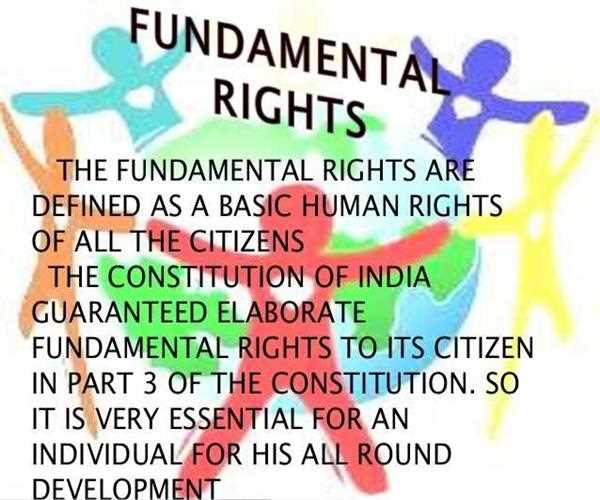 1. Right to Equality: This right has 5 provisions under Article 14-18. The Right to Equality states the purpose to establish the law where all the citizens should be treated equally before the law. No discrimination against people on the basis of Religion, Race, Caste, Sex, or Place of Birth. This is necessary to carry out social equality. No State will discriminate against any citizen in the Public Employment. Regardless, of the special provisions for the people belonging to Scheduled Caste (SC), Scheduled Tribes (ST), and Other Backward Classes (OBCs). The Practice of Untouchability in any form is a punishable offense in the eyes of the law. All the British Titles like Sir (Knighthood) have been abolished as they create a difference among people.

2. Right to Freedom: This right is included under Article 19-22. This Right states Freedom of Speech and Expression, Freedom to assemble peacefully and without arms, Freedom to form Association and Unions, Freedom to move freely throughout the Indian Territory, Freedom to live and settle at any part of the country, Freedom to practice and professional, or carry any occupation, trade, or business. As well as other rights are, Protection from the conviction for offenses, Protection of life and Personal Liberty, Protection against arrest and detention in certain cases.

3. Right against Exploitation: This right is included under Article 23 and 24. The Right against Exploitation states that, Prohibition of Human Trafficking (buying and selling of Human Beings as material goods are considered as Illegal activity and a punishable offense) and Forced Labour (poor are kept unwillingly as a slave to do household works or forced to beg or work as a labor to earn money for their leader), Prohibition of Employment of Children in Factory, Hotels, etc. (Children’s below the age of 14 are not allowed to work in any factory or mine, if it is so then, the employer has to face legal charges against him).
4. Right to Freedom of Religion: This right is stated under Article 25-28. The Right to Freedom of Religion states that, All persons have equal freedom of conscience and the right to adopt, practice and propagate any religion freely, the law does not permit practice of Sati Pratha, Freedom to manage Religious Affairs (can maintain an institution for religious and charitable purpose), Freedom to payment of Taxes for promotion of any particular Religion, Freedom to attend any religious instruction or religious worship in any specific educational institution.
5. Cultural and Educational Rights: This right is stated under Article 29 and 30. The Cultural and Educational Right states that, Protection of interests of Minorities (any minority group if have a different language or culture, they have all rights to conserve the same), Right of minorities to establish and administer educational institution (all minorities, either based on Religion or Language, have the right to establish and administer educational institutions of their choice).
6. Right to Constitutional Remedies: This right is stated under Article 32. The Right to Constitutional Remedies states that every individual i.e. every Indian Citizen has the right to seek help from the Court if they are violated. When any of the rights are violated, we can seek justice through courts, and even directly approach the Supreme Court that can issue directions and order, if the need arises.
7. Right to Education: This right is stated under Article 21A. It is included as a fundamental right in 2002 under the 86th Constitutional Amendment. It is the major step taken by the government to make the country free of Illiteracy. The Right to Education states that all the children in the age group of 6-14 year can claim compulsory and free education as a Fundamental Right. As the Act says that, every child has the right to go to school and receive a quality education.