What do you know about Neeraj Chopra? What is his position in the Indian Army?

Please log in or register for appropriate action.
0 votes
64 views
asked 25 days ago in Sports by Lily Chitlangiya

What do you know about Neeraj Chopra? What is his position in the Indian Army?

Please log in or register to vote.
0 votes
answered 16 days ago by Harshal Vispute

Neeraj Chopra VSM is an Indian track and field athlete who competes in the javelin throw. He was born on December 24, 1997. He is ranked second in the world by World Athletics as of August 2021. Chopra is India's first Olympic gold medalist in track and field. In the Indian Army, he is a JCO (Joint Commissioned Officer). He is also the first Indian track and field athlete to win in the IAAF World U20 Championships, where he established a world under-20 record throw of 86.48 meters in 2016, making him the first Indian athlete to do so.

Chopra competed in both the Commonwealth Games and the Asian Games in 2018, acting as the flag bearer for the latter and earning gold medals in both. Chopra won the gold medal in the 2020 Tokyo Olympics with a throw of 87.58 meters on his second try on August 7, 2021. As of 2021, he is one of only two Indians (the other being Abhinav Bindra) to win an individual Olympic gold medal, as well as the youngest Indian Olympic gold medalist in an individual event and the only one to win gold

Chopra was born on December 24, 1997, to Satish Kumar and Saroj Devi in Khandra village, Panipat district, Haryana. He comes from an agricultural household and has two sisters. As of 2021, he is pursuing a Bachelor of Arts at Lovely Professional University in Jalandhar, Punjab, after graduating from Chandigarh's Dayanand Anglo-Vedic College. 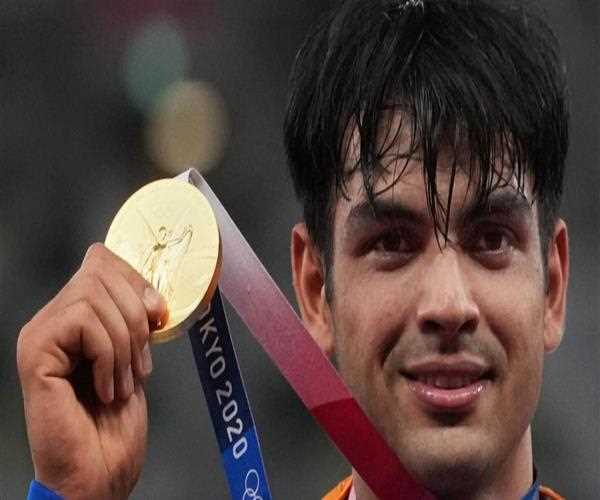 Chopra made his Olympic debut on August 4, 2021, in the Japan National Stadium, representing India. With a throw of 86.65 meters, he won his qualification group and qualified for the final.

Chopra's victory gave India a total of seven medals at the Games, exceeding the country's previous best of six medals at the 2012 London Olympics. Chopra rose to second place in the men's javelin throw on the international stage.