what do you know about valcanoes and state its type.

Please log in or register to vote.
0 votes
answered 08-Feb-2020 by Saddiya Anwar 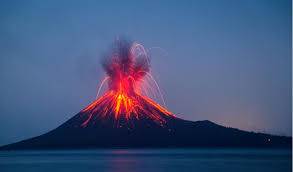 A mountain or hill with an opening on top known as a crater is said to be volcano. Magma- hot melted rock, gases ash and other materials from inside the earth mix together a few kilometres under the ground and blast out or erupt through the crater.  The magma when reaches the air is called as magma.

Lava may be hot as 1000 degree Celsius. When Lava cools down and solidifies on the earth's surface making new landforms. While in some eruptions huge fiery clouds rise over the mountains, and glowing rivers of lava flow down its sides.
These are the different types of volcano :
Active - which is alive now. Eg :- Etna, Stromboli, Pinatubo.
Dormant -which has not erupted for quite some time. Eg :- Vesuvius, Barren Islands.
Extinct - which has not erupted for several centuries or may not occur in future.
Type of eruption :
Explosive or Central : Hawaiian type, Vesuvius type, Pelean type etc.
Fissure or quite eruption : lava flows out or floods, mud flow and fumaroles, quietly.
Read More at : answers.mindstick.com

Please log in or register to vote.
0 votes
answered 07-Sep-2020 by Palak Anjum 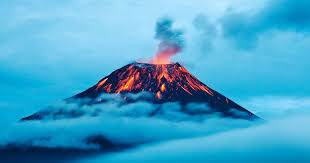 A volcano is primarily the location in the ground from where the molten rock, known as magma, lies at the very bottom of the earth. After magma comes to the ground, it is called lava. The lava forms a cone scattering on and around the mouth of the volcano. Some important information related to the volcano is given below.

Important information related to volcano
Any volcano is considered alive until lava, gas, etc. comes out of it. If lava does not come out of the volcano, it is called a passive volcano. The dormant volcano may become active in the future. If a volcano remains dormant for 10,000 years, it is called a dead volcano.
The explosiveness of a volcano depends on the emission speed of the magma, and the emission speed of the gas contained in the magma. Magma contains a very small amount of water and carbon dioxide. The magma emanating from an active volcano shows that its gas emission action is similar to the action of gas extraction from a carbonated beverage.
Magma rises above the ground layer very quickly and becomes a thousand times larger than its original size. Volcanoes can be of many sizes. Some volcanoes are of the shape of a right cone, while some volcanoes are filled with very deep water. It is known by three different names, depending on the different shapes of the volcano.
Types of volcanoes
Volcanoes are mainly of three types. These three types of volcanoes are described below.
Shield Volcano: 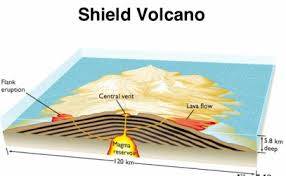 If the mega is very hot and coming out of the ground at very high speed, then explosion is normal. The magma emanating from it is very high. Due to the lava flowing very freely, it freezes in a certain way on the face of the volcano, and its slope decreases as the volcano moves away from the origin. The magma temperature of such a volcano is between 800 and 1200 degrees centigrade.
Composite Volcano: 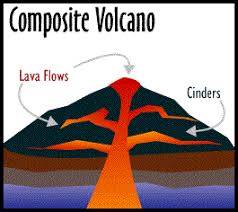 It is also known as 'Strato Volcano'. This type of volcano has a special explosion. When the temperature of the magma decreases slightly, it starts to freeze and there is a problem in spreading the gas. As a result, magma coming from below the ground comes out with great force and explodes. In such a volcano a certain type of lava flows called a wave. The lava temperature of this volcano is between 800 and 1000 degree centigrade.
Caldera Volcano: 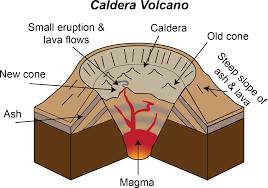 In such a volcano, such an eruption occurs that most of the lava settles on the face of the volcano, and the volcano is shaped like a basin. The lava emanating from this volcano is very viscous. Its lava is relatively colder than the rest of the volcanic lava. Its magma temperature is between 650 to 800 degree centigrade.
5 world famous volcanoes
Some volcanoes are famous globally due to their size and their explosiveness. The names and short descriptions are given one by one below.
Mount Vesuvius:
This volcano is located in Italy. This cone is a volcano, which is very well known for its eruption of 79 AD. Millions of people died at the time of this explosion. During its explosion, Volcanic gas, stones and ash fly in huge quantities up to 33 km above the ground. It belongs to the Pacific Ocean fire pit. It is currently the most dangerous volcano in the world because around three million population lives around this volcano. Its height is 1281 meters. The last eruption at Mount Visuvius was in March 1944. Many villages of San Sebastian were destroyed in this explosion. It is a part of the 'Companion Volcanic Arc', formed from the convergence of Africa and Eurasia tectonic plates.
• Mount Ridge:
In 1985, there were two explosions in Columbia, South America. After the explosion, water and mud of many small rivers started flowing at its slope. The city settled in an area of about 30 miles under this mud, in which more than 25000 people died. It belongs to the Pacific Ocean fire pit. Several active volcanoes are present on the Pacific Ocean fire pit. Its height is 5,321 meters. Mount Ridge was last erupted in 2016. It is the third northernmost volcano in the northern volcanic zone of the Anden Volcanic Belt. The Anden Volcanic Belt lies on the Nazca Sea Plate and the South America Continental Plate. This volcano can attract explosives that can have an effect on the glacier. It is a type of Composite volcano, which is spread over an area of about 200 kilometers.
• Mount Plea:
The eruption of Mount Plea is considered to be the deadliest volcanic eruption of the twentieth century. It was exploded in 1902. It is situated on one of Martinique and the Caribbean. 30000 people died in its 1902 explosion. Its height is 1,397 meters. Its last eruption occurred in 1932. It is a Composite volcano located in France, formed from pyroclastic rocks. It is located at the northern end of Marinic Island, which is located at the Lesser Antilles Volcanic Extract. This arc is formed by the merging of the North America plate and the Caribbean plate.
• Mount Krakatoa:
It is a composite volcano located in Indonesia. A tsunami occurred in 1883 with its explosion, and around 35000 people died. Its height is 813 meters. It is believed that the highest noise occurred during the 1883 eruption. In the new history, no name has been recorded for such a volcano. At this time its voice went up to 4800 km from its point of origin. The last eruption of Mount Krakatoa occurred on 31 March 2014. Krakatoa Island is located in the Sunda Strait between Java and Sumatra. It is a part of the Indonesian island arch, which is situated on the Uresian and Indo-Australian tectonic plate.
Mount Tambora:
It is one of the '100 plus' volcanoes in Indonesia. Its explosion in 1815 had a very bad effect. Its height is 2722 meters. After the explosion in 1815, the development of the crop in the surrounding areas was stopped. Weather changes were also seen in many places. This year is also remembered as 'The Year Without Summer'. About 90,000 people died in this explosion. The last explosion in Mount Tambora was in 1967. It is an active composite volcano.
Volcanoes of india
Volcanic eruptions are seen in some special places in India. The subject of India's special volcano is given below.
Baren Island: Baren Island is located in the Andaman Sea. The only active flame of South Asia is seen here. Its first explosion was seen in 1787. After that, this volcano has erupted more than ten times. This year, this volcano became active once in the month of February of 2017. Its height is 353 meters.
Narkandam Island: It is also a small island in the Andaman Sea, whose height is 710 meters above the mean sea level. Some active volcanoes are found in the southern western region of this island. The area of this island is 7.63 km. The volcano located on it was 710 meters long.
Deccan Traps: Situated on the Deccan Plateau, this province is favorable for volcanoes. Many years ago a volcanic eruption was seen here.
Baratang Island: 'Mud Volcano' has been found on this island. The volcano was last seen in 2003.
Dhinodhar Hills: It is located in Gujarat. Dead volcanoes are found here. The height of this dead volcano is 386 meters.
Doshi Hill: It is located in Haryana. A dead volcano has also been seen on it, which has a height of 540 meters.
In this way, only one active volcano in India is located on Baren Island.