Explain about Siberian birds and how they are related to Sangam.

Please log in or register to vote.
0 votes
answered 07-Feb-2020 by Saddiya Anwar 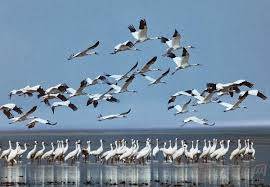 The arrival of Siberian birds at different water bodies indicates the onset of winters. Inflow of foreign tourists increases in winters. These also witnesses their arrival at Sangam Nagri in winters.  These migratory birds begin their journey from Siberia travel through Afghanistan and Central Asia before reaching to the famed bird sanctuary of Bharatpur. These birds also travel to the various wetlands including Sangam area, Bheerpur, Narayanpur kalan, Dehraon and Sirsi.  According to Prof Sandeep k Malhotra who is managing the parasitology laboratory in zoology department of University of Allahabad, the confluence of Ganga and Yamuna is mainly visited by Larus ridibundus ridibundus popularly known as Black Headed Gull. Various species of Siberian birds arrives at wetlands during winter season. White colour Siberian birds adorns the beauty of Ganga and Yamuna.

Please log in or register to vote.
0 votes
answered 11-Sep-2020 by Palak Anjum

Siberian Crane or Snow Crane: Facts at a Glance

Siberian cranes (Leucogeranus leucogeranus – Leucogeranus leucogeranus) are also known as Siberian white cranes or snow cranes (snow cranes). Siberian cranes are almost white like snow, except for their black primary wings which are visible during flight. Their population is found in the Arctic tundra of western and eastern Russia. The eastern population migrates to China during winters while the western population migrates to Iran, India and Nepal during winters. They provide the longest distance between cranes (cranes).
A look at the facts about Siberian Crane:

How to identify Siberian Crane? 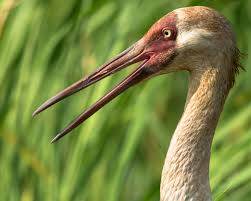 Siberian cranes are very easy to identify in a flock of birds. Its unique red coloured mask covers the front forehead, face and sides of the head and ends behind the eyes.
Although this species is easier to identify than other species, it is very difficult to distinguish between male and female Siberian cranes. The female crane is slightly smaller in size and its beak is also slightly smaller.
Its eyes are yellow in colour while the feet and toes are red in colour. 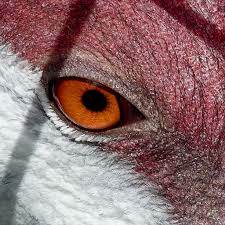 As the name suggests, Siberian cranes are residents of Siberia. Although earlier, these birds were found in the central part of Siberia, but now they are only found in the eastern and western parts of here. They need aquatic environments such as lakes and marshy places for breeding, eating and living.
Mating behaviour of Siberian cranes
The mating season of these birds starts from May and lasts till June. Their sexual intercourse consists of coordinated body movements and sound, through which they attract their partner. Siberian cranes stand in a special posture, move their heads backward and point their beaks skyward.
For sexual intercourse the male lifts his wings up to his back while the female keeps her wings down.
How to incubate eggs?
Siberian cranes build their nests, marshes, mud-laden ground or in other wetlands where the water is fresh and with good visibility. A female lays two eggs on average and both males and females incubate it for 29 days. Chicks take 70–80 days to make their first flight.
What Siberian Cranes Eat: 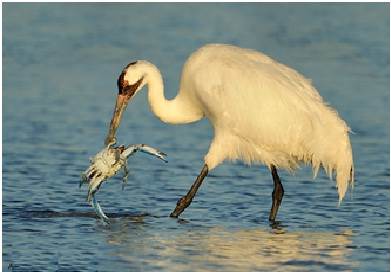 By nature Siberian cranes are omnivores but it is worth noting that most of the time, with the exception of the breeding season, these birds mostly depend on a vegetarian diet. They have good ability to dig easily in wet soil, so they are able to easily extract nutritious roots and tubers from marsh lands. Some have also been observed eating earthworms, crabs and small insects.
Why are Siberian cranes becoming less?
These are rapidly diminishing as humans occupy the Siberian crane habitat. Another reason is that these birds are hunted for recreation and meat on the migration route.
Why do they go on a stay?
They are migratory birds and visit all tropical countries with warmer winters. Their habitat: Russia and Siberia have very cold winters, so they fly in the east direction in search of warm climate.
To reach the winter climate, especially to cross the mighty Himalayan ranges, these birds have to fly high.
Therefore, these birds travel to many southeast Asian countries including India. Bharatpur Bird Sanctuary of Rajasthan is famous for migratory Siberian cranes.
From thousands of kilometers away, these birds come to take a bath in the Ganges 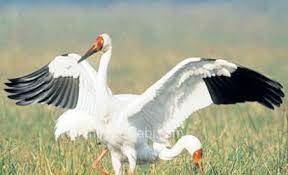 Their journey is not so easy. There are many difficulties on the way. Many birds lose their lives due to storms, storms and strong winds. But still, every year, running away from the terrible cold, they turn to India.
Every year at the time of Magh Mela and Kumbh Mela in Prayagraj of Uttar Pradesh , People have came from all over the world to take a dip in the Sangam in this Mela. Due to their faith in this cold, people take a dip in cold water in the morning. But do you know that not only humans, a special kind of birds also come to this fair? These birds are foreign guests who come to India every year from thousands of kilometers. The Kumbh Mela is held every 12 years in Prayagraj, but every year also the Magh Mela is held at the confluence of Ganga and Jamuna. These white birds are seen every year from December to March along the banks of the confluence.
Where do birds come from every year: 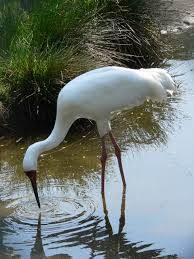 These birds come from Siberia region of Russia. These are called Siberian birds. You will be seen here in thousands. These are birds that fly in the air and also swim in the water. The beak and legs of these birds of white colour are orange. Siberia is a very cold place where the temperature drops from zero to 50, 60 degrees from November to March. At this temperature, it becomes very difficult for these birds to stay alive. That is why these birds come to India after a distance of thousands of kilometers. Prayagraj in Uttar Pradesh is much cooler than Siberia and the open end of the confluence here creates a good environment for these birds to survive.
Why do these birds come from so far:
Migration is a very common process in organisms. Migration is the process of moving very large numbers of animals in the same species due to weather. This migration is often done in a fixed manner repeatedly every year. That is, as soon as the weather got bad, these creatures left their home and moved to some other place and come back to their home as soon as the weather is fine. Apart from Siberian birds, there are many examples of this. It is mostly the case that in areas where there is a lot of cold, organisms move to other places for better food, reproduction and protection.
How long does it take to travel: 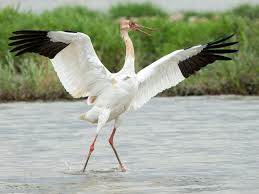 There are hundreds of species of Siberian birds that leave their home every year and find shelter around the world. To reach India, these birds fly more than 4000 km long and complete the journey. These birds come to India crossing Tajikistan, Afghanistan and Pakistan. Such a long journey, he finishes flying in a group of millions, not in a group of 10,20. They also have a landing place in India. These birds first reach Baramati in Maharashtra. That is, if a bird is separated from the rest in the journey, then it knows that its companions located it in Baramati
See you in ‘Big Bird Century’. These birds gather here and go to every corner of India and spend the entire winter here.
How do you prepare to come to India:
About two months before migration, these birds start preparing for it. As the summer ends and the days start getting shorter, the photoreceptors of the brains of these birds start changing the hormones in their body. These changes in the hormone increase the feathers on their body, which are necessary for long-term flying. Along with this, these birds eat well to increase the fat on their body and increase weight. Due to increased body fat, they get warm in the long journey and there is no shortage of food. In this way, after preparing for about 2 months, these birds fly in assembled in millions.
But their journey is not so easy. There are many difficulties on the way. Many birds lose their lives due to storms, storms and strong winds. But still, every year, running away from the terrible cold, they turn to India.