Name the Governor General who abolished Sati in 1829.

Name the Governor General who abolished Sati in 1829

Please log in or register to vote.
0 votes
answered 18-May-2019 by Anonymous User

The practice of Sati was banned by the Governor-General “Lord William Bentinck” in all the jurisdictions of British India in 1829. The law was passed on December 4, 1829. 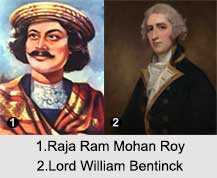 The practice of Sati was done in India among several communities maximally the higher classes of Hindus since the late ancient and medieval era. The practice was first banned in 1515 in Goa by Portuguese, and then was in Chinsura by Dutch and in Pondicherry by French. However, during the British era, the Practice of Sati was most commonly in practice in Bengal and Rajputana region.
But from 1812, Raja Ram Mohan Roy started a fierce campaign against the Sati practice because he lost his sister-in-law due to this custom, and for this, he even visited Calcutta and tried to persuade people against this evil custom. Later, due to fierce campaigning and promotion by Raja Ram Mohan Roy and others, the Sati practice was legally banned in all the areas under the Bengal Presidency. After this regulation, the people who try to practice Sati were declared guilty of “culpable homicide”.
After all this, the practice of Sati remained legal in the princely states of British India, especially in the Rajputana where it was very common. Later, Jaipur also banned the practice of Sati in 1846.

Lord William Bentinck has been the Governor General of India from 1828 to 1835. His tenure has been famous for the social reforms such as Abolition of Sati in 1829, Suppression of Thugi, and Suppression of Infanticide, etc. As a respect, his statue in Calcutta has an inscription which was written by ‘Lord Macaulay’: ‘He abolished cruel rites; he effaced humiliating distinctions; he gave liberty to the expression of public opinion; his constant study was to elevate the intellectual and moral character of the nations committed to his charge’.