Who was the first Chief Justice of Free India?

Please log in or register for appropriate action.
0 votes
55 views
asked 7 days ago in Law & Legal Issues by Lily Chitlangiya

Who was the first Chief Justice of Free India?

Please log in or register to vote.
0 votes
answered 6 days ago by Sanjay Goenka 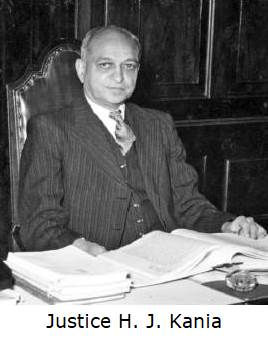 Sir Harilal jekisundas served the Nation from 1950 to 1951 as the Chief Justice of India. He was appointed by the then president of India “Dr. Rajendra Prasad “ he preceded the position of company law of Britain establishment and was succeeded by M. Patanjali Sastri, he married the daughter of Sir Chunnilal Mehta, name of the daughter was Kusum Mehta, he used to live with his family in which he has one child girl, Rukmini shah.

Kania was born in a middle-class family at Surat so he completed his education from government law college in 1911, Mumbai and government law college, in 1910, Chennai .and after done with the degree he registered himself as a barrister at the Bombay High Court in 1915, he also used to serve some time as the member of the executive council of the governor of Bombay. And he had also worked as the acting editor of the Indian Law reports.

In 1930, he was appointed as the acting judge on the Bombay high court. After completing one year he was promoted as the additional judge in the same court. He served the Bombay high court until 1933 and then he returned to the bar and then he was appointed as the associate judge in June. For his seniority of association in the court, he was also awarded as the most senior associate judge at the high court. And served as acting Chief justice from May –September 1944 and from June – October 1945. On 20 June 1946, he was promoted to associate judge of the federal court of India, after being headed by Sir Petrick Spens. After the retirement of Patric Pence on 14 august 1947, Kania succeeded him as chief justice. And in this way after becoming a republican country on 26 Jan 1950. Kania was appointed the first chief justice of the supreme court of India. And during his serving, he read the oath to the first president of India Dr. Rajendra Prasead. He served his country to his last breathing and while the serving he died in a sudden attack of heart. On November 6, 1951. The aging time of the CJI till his serving was 61.

5- Chiranjit Lal Chaudhari Vs the Union of India and others on 4 December 1950.