What is the reservation system in India?

What is the reservation system in India?

Please log in or register to vote.
0 votes
answered 14-Jul-2021 by Anonymous User

Reservation in India is the way of facilitating a person in education, scholarship, jobs, and in promotions. It is a quota-based affirmative action. SC, ST and OBC, and in some states Backward Classes among Muslims under a category called BC(M), are the primary beneficiaries of the reservation policies under the Constitution. The objective of reservation is to provide a level playing field of equal opportunities for all. It is governed by constitutional laws, statutory laws, and local rules and regulations.

It has been there in India since very long, when the Constitution was composed by Dr. B.R. Ambedkar. He introduced this system to uplift the lower sections of society (according to caste) which, through the ages, have been exploited and deprived of rights and basic amenities.
Differentiation among the ‘high’ and ‘low’ class dates back as early as 2nd century B.C. where those of higher class enjoyed all luxuries given by the authorities while lower caste served them.
Although it was first thought of in 1882 by William Hunter and Jyotirao Phule, but it was introduced in 1933 when British Prime-Minister Ramsay Macdonald presented the ‘Communal Award’. B.R. Ambedkar, who was a renowned lawyer composed it on pen and paper for Indians to be followed.
It has been noticed that through the history of reservation, it has been able to bridge the gap between the ‘upper’ and ‘lower’ caste. Affirmative Action has helped many backward communities in getting education and jobs, which were denied them since long.
But the caste-based reservation system is still a cause of worry for many reasons.
• Because of people who are above the creamy layer, i.e. who are rich enough to afford the services, services are in shortage or denied to the actual needy population.
• It is also capable of harming the economy of the country by degrading the efficiency of labour.
• There are many people who require special provisions but because of being in the unreserved category are neglected. 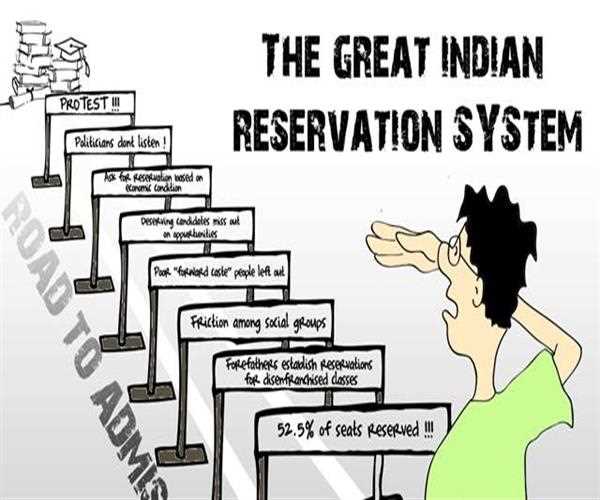 What should be done?
• The reservation should be based on income per capita instead of being on the caste system.
• The people above the creamy layer should be restricted from taking advantage of ‘reservation amenities’
• A more rational model of reservation based on equity and common sense must be envisaged.
• Basic schooling system should be improved.
• The government should responsibly conduct regular surveys and re-examine the reservation policy in the present scenario.
The reservation system has changed the face of India completely. It has been correctly said by Jaya Mishra, “Caste based reservation system is an image of inequality in the nation which speaks of equality”
The idea of reservation policy should be maintained, and the actual backward classes who are in reality denied access to education, job opportunities etc. be benefitted.
If we continue to demand the benefits of backwardness and ancient-systems, we would never be able to move forward.