How old is Ayodhya?

How old is Ayodhya?

Please log in or register to vote.
0 votes
answered 05-Aug-2020 by Anonymous User

In traditional history, Ayodhya was the initial capital of Kosala state. During the time of Gautam Buddha, there were two parts of Kosal - North Kosal and South Kosal, between which the river Saryu flowed. In the Buddhist period itself a new settlement was built near Ayodhya, whose name was Saket. The names of both Saket and Ayodhya are also found simultaneously in Buddhist literature. Which gives information about the different existence of both.

Ayodhya is mentioned in the Ramayana as the capital of Kosala district. No special mention is found in the Puranas regarding this city. At the same time, this city is known as Awadh (presently Ayodhya) at the time of Rama's birth.
A mosque was built at such a place in Ayodhya, which Hindus consider to be the birthplace of their deity Lord Rama. It is said that Mir Baqi, the commander of the Mughal king Babur, built a mosque here, which was known as Babri Masjid. Babur came to India in 1526. By 1528, his empire reached Awadh (present Ayodhya). After this, the information of history for nearly three centuries is not present on any open source.
Both the cities of Ayodhya and Saket have been considered the same by many scholars. Kalidas has also considered both cities to be the same in Raghuvansh, which is also found in Jain literature. Cunningham also assimilated Ayodhya and Saket from the same city. On the contrary, different scholars have equated Saket from different places.
In Buddhist texts also Ayodhya and Saket are presented as different cities. At the same time, Ayodhya has been described as the capital of Kosala in Valmiki Ramayana, after which Saket has been merged in Sanskrit texts.
Ayodhya is a small village or town situated on the banks of the Ganges. The same 'Saket' was a different metropolis than that. Therefore, in any case, these two cannot be one.

Please log in or register to vote.
0 votes
answered 03-Sep-2020 by Palak Anjum
Ayodhya is a city and the district headquarters of Ayodhya district in the Indian state of Uttar Pradesh. Ayodhya is an ancient religious city situated on the banks of river Saryu. It is believed that this city was settled by Manu and gave it the name of 'Ayodhya' which means 'ayudhya atharth' where there is never a war. It was also called 'Kaushal Desh'. According to mythological beliefs, there used to be the rule of Suryavanshi / Raghuvanshi kings in Ayodhya, in which Lord Shri Rama was incarnated. In the 7th century, Chinese traveler Hentsang came. According to him there were 20 Buddhist temples and 3000 monks lived here. It is one of the Sapta Puris.
In the Veda, Ayodhya is described as the city of God, 'Ashtachakra Navdwara Devanam Puryodhya' and its prosperity has been compared to heaven. Ayodhya is mentioned in the Atharvaveda as a compound symbol - Ashtachakra Navdwara by Devanam Puryodhya. Tasyaam Hiranmay: Kosh: Swargo Astrology:॥ (Atharvaveda - 10.2.31). According to Ramayana, Ayodhya was founded by Manu. It was situated on the banks of the Puri Saryu in twelve Yojana (about 14 km) in length and three Yojana (about 37 km) in width. For many centuries, this city was the capital of Suryavanshi kings. Ayodhya is basically a city of Hindu temples. Remains associated with Hinduism can still be seen here. According to Jainism, five of the twenty-four Tirthankaras were born here. The first Tirthankara Rishabhanath ji, the second Tirthankar Ajitnath ji, the fourth Tirthankar Abhinandanath ji, the fifth Tirthankar Sumatinath ji and the fourteenth Tirthankar Anantnath ji. Apart from this, according to both Jain and Vedic beliefs, Lord Ramchandra ji was also born on this land. All the said Tirthankaras and Lord Ramchandra ji were all from Ikshvaku dynasty. Its importance lies in its ancient history because it has been the capital of the famous and majestic Kshatriyas (Suryavanshi) of India. Among the said Kshatriyas, Dashrathi Ramchandra is worshiped as an avatar. Earlier it was the capital of Kosala district. According to ancient mentions then its area was 96 square miles.
Some important features of Ayodhya
The remnants of the ancient city of Ayodhya now remain in ruins, with some fine temples. But after the order of Supreme Court i.e. Supreme Court on 9 November 2019, now a new grand Ram temple is going to be built hereTill this new temple is built, Ramlala idol has been shifted from birthplace and installed in a temporary temple. Sitarasoi and Hanumangarhi are the main among the ancient temples of present Ayoghya. Some temples were built in the 18th and 19th centuries, among which Kanakabhavan, Nageshwarnath and Darshan Singh temples are worth visiting. There are also some Jain temples. There are three fairs in the year - March-April, July-August and October-November. Lakhs of travelers visit here on these occasions.

Special edit
Apart from the leela of Lord Shri Ram, there have been seven other revelations of Srihari in Ayodhya which are known as Saptahari. At different times, the deities came and appeared with the penance of the sages. Their names are Lord Gupthari, Vishnuhari, Chakrahari, Punyahari, Chandrahari, Dharmahari and Bilvahari. 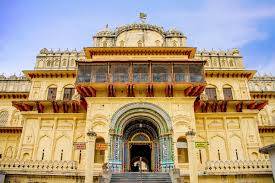 Ramkot located in the western part of the city is the main place of worship in Ayodhya. Devotees from India and abroad continue to visit here throughout the year. Ramnavami festival celebrated in March-April is celebrated with great fervor and pomp here. 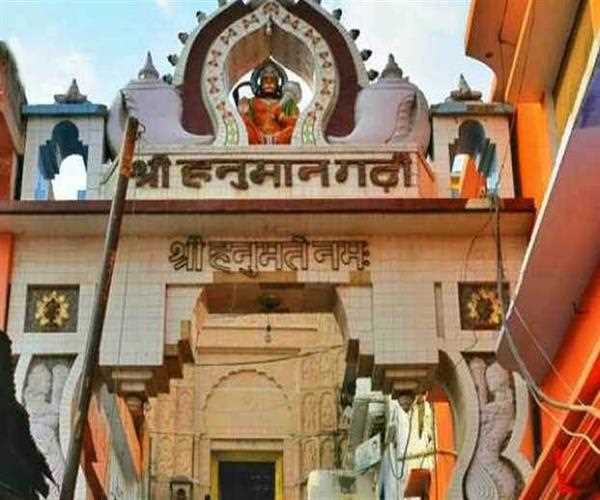 Located in the center of the city, this temple can be reached at a speed of 76 steps. Ayodhya is called the city of Lord Rama. It is believed that Lord Hanuman always stays here. That is why devotees come to Ayodhya and see Lord Hanuman before seeing Lord Rama. The most prominent Hanuman temple here is famous as 'Hanumangarhi'. This temple is situated on a high mound in front of the Rajdwar. It is said that Hanuman used to live in a cave here and protect Ramjanmabhoomi and Ramkot. Hanuman ji was given this place to live.

Lord Shri Ram had given this right to Hanuman ji that any devotee who comes to Ayodhya for my darshan must first worship you. Even today, the birthday of Sankatmochan is celebrated at midnight on the day of Chhoti Diwali. In the holy city of Ayodhya, before washing sins in the river Saryu, people have to take permission from Lord Hanuman. Due to this temple being situated on a mound in Ayodhya one has to climb about 76 steps to reach the temple. After this, a 6-inch statue of Pawanputra Hanuman is seen, which is always beautified with flower-garlands. The main temple houses the statue of Anjani Mata with Bal Hanuman. Devotees believe that visiting this temple fulfills all their wishes. There is a statue of mother Anjani and Bal Hanuman in the temple premises, in which Hanuman ji is seated as a child in the lap of his mother Anjani.
There is a legend named Sultan Mansoor behind the construction of this temple. Sultan Mansoor Ali was the Nawab of Awadh. Once his only son fell seriously ill. Pran was not able to escape, as the pulse of the night deepened and his pulse started to erupt, then the Sultan gave up the tiredness and laid the forehead at the feet of the troublesome Hanuman. Hanuman meditated on his adorable Lord Shri Ram and the beating of the son of Sultan resumed. Mansoor Ali, the Nawab of Awadh, having defended the life of his only son, bowed at the feet of Bajrangbali. After which the Nawab not only got the Hanuman Garhi temple renovated but also wrote on the copperplate that he would never have any right of any king or ruler over this temple nor any tax would be collected from the offerings here. He made 52 bighas of land available for Hanuman Garhi and Tamarind Forest.
There is no clear evidence of the construction of this Hanuman temple but it is said that how many times Ayodhya is inhabited and deserted, but still one place which always remained in its original form is the Hanuman mound which is famous today as Hanuman Garhi is. The marks brought as a symbol of victory from Lanka were also kept in this temple which are taken out on special occasions even today and they are worshiped at different places. Hanuman, who is enshrined in the temple, is considered the king of present-day Ayodhya. It is said that Hanuman used to live in a cave here and protect Ramjanmabhoomi and Ramkot. The main temple has a statue of Anjani with Bal Hanuman. Devotees believe that visiting this temple fulfills all their wishes.
Raghavji's temple 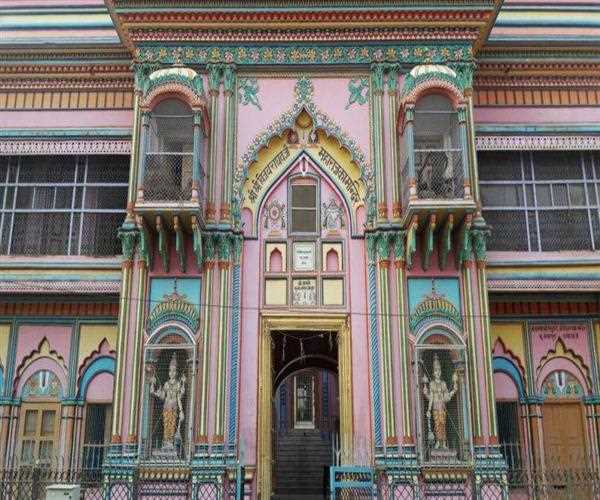 This temple is located in the center of the city of Ayodhya, the place of the very ancient Lord Shri Ramji, which we also know by the name of (Raghavji's temple), Lord Raghavji is alone in the temple, this is the only temple in which Mother along with God The idol of Sitaji is not seated. After taking bath in Sarayu ji, Raghav ji is seen. 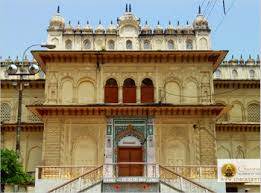 The Nageswara Nath temple is said to have been built by Kush, the son of Lord Rama. It is believed that when Kush was bathing in the Saryu river, his arm was lost. The arm was found by a snake girl who fell in love with Kush. She was a devotee of Shiva. Kush built this temple for her. It is said that this is the only temple dating back to the time of Vikramaditya. Shivaratri festival is celebrated here with great pomp. 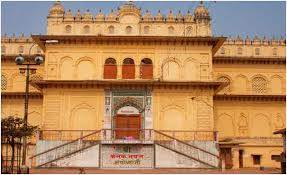 Kanak Bhawan, situated near Hanuman Garhi, is an important temple of Ayodhya. This temple is popular for the gold crowned statues of Sita and Rama. For this reason many times this temple is also called the house of gold. This temple was built in 1891 by the queen of Tikamgarh. Shri Vigraha (Shri Sitaram Ji) of this temple can be called the most beautiful form of India. Apart from daily darshan, all Samaiya-Utsav are celebrated with grandeur.
Acharyapeeth Sri Laxman Fort 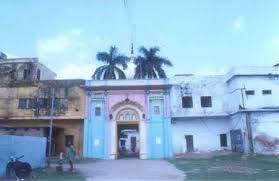 In addition to living a higher spiritual life, you have composed about one hundred books like 'Raghuvar Gun Darpan', 'Paras-Bhaag', 'Shri Sitaramnamapratap-Prakash' and 'Ishq-Kanti'. Sri Lakshman Fort was built by Rewa Rajya (MP) overwhelmed by your penance. In 52 bigha, the land of the elaborate ashram was given to you as a donation from the government during the British era. This ashram situated on the banks of Sri Saryu conducts saint-go-brahmin service with Sri Sitaram Ji Aradhana. Shri Ram Navami, Sawan Jhula, and Shri Ram Marriage Festival are celebrated with great grandeur here. This place is a great option for pilgrims to stay. Sunset darshan is the center of attraction due to its proximity to the edge of Saryu.
Jain temple 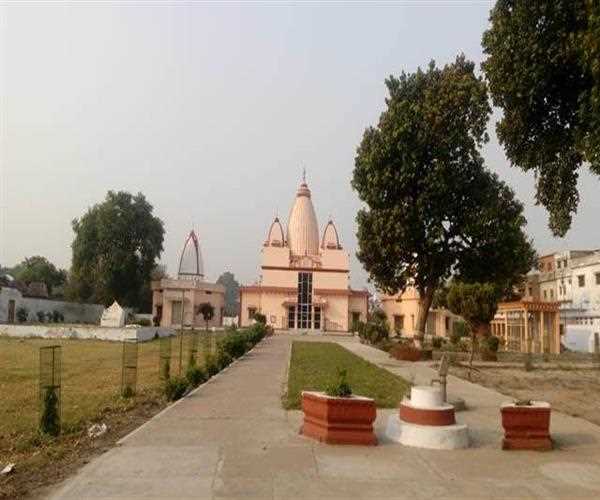 Apart from Hindu temples, Ayodhya is also very popular for Jain temples. Many followers of Jainism come to Ayodhya regularly. Ayodhya is also known as the birthplace of the five Jain Ratithkaras. Where the temple of Rathithkar was born, there is a temple of that Rathithkar. These temples were built by Kesari Singh, the treasurer of the Nawab of Faizabad. 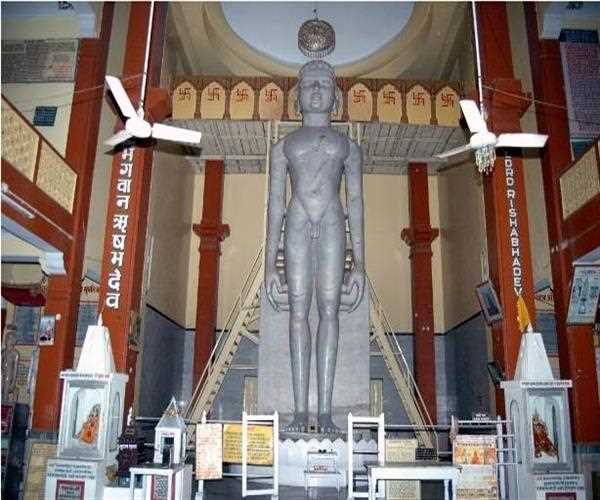 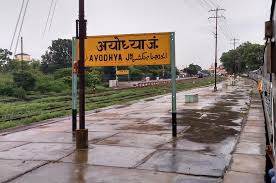 Ayodhya, Lucknow is a station in Pandit Deendayal Railway Block. Faizabad is the nearest main railway station to Ayodhya. This railway station is located on the Mughal Sarai-Lucknow line. It can be reached from Uttar Pradesh and almost all the cities of the country. There are also direct trains to Basti, Banaras and Rameswaram from here. 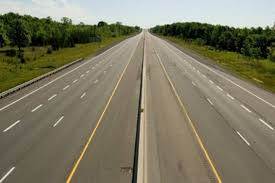