who wrote the R.D. Burman: The Prince of Music and When?

who wrote the R.D. Burman: The Prince of Music and When?

Please log in or register to vote.
0 votes
answered 02-Dec-2021 by Harshal Vispute

Unpredictable music composer who challenged societal norms, a trailblazer who pioneered the blending of Western rock and jazz with Indian classical music. R.D. Burman's life and work establish him as one of the most influential and diverse musicians in Indian cinema music from the 1960s through the 1980s.

Whether the film was a hit or a flop, his music was always memorable, from the upbeat 'Dum Maro Dum' and the classic 'Chand Mera Dil' to the soulful 'Tum aa Gaye ho, nur aa Gaye hai' and 'Tujhse Naraz Nahin Zindagi.'

Some films are claimed to have been successful only because of their tunes! But, while he was praised as the ruling prince when he made chartbuster after chartbuster, he was labeled 'luckless' and subjected to indignities as his films began to fail towards the conclusion of his career.

R.D. Burman: The Prince of Music, written by Khagesh Dev Burman, pays tribute to this extraordinary artist with an eccentric streak who continues to inspire international awe, respect, and affection. 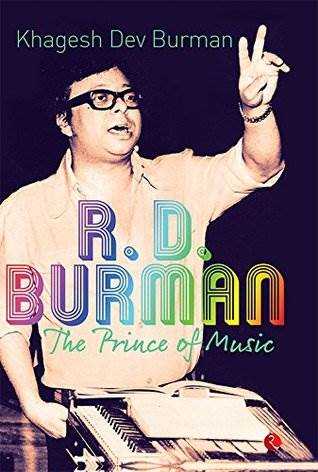 This book not only discusses the maestro's career in loving detail, but also sheds light on his relationships with many other artists of his generation, including his famed friendship with Kishore Kumar, his stubborn relationship with Asha Bhosle, and, most crucially, his troubled but respectful relationship with his father, S.D. Burman

R.D. Burman: The Prince of Music is a collector's edition that should be on every music lover's shelf, with a chronological study of most of his key compositions.

Rupa Publications India published Khagesh Dev Burman's book on October 7th, 2015. Khagesh Dev Burman is a descendant of Tripura's royal line and is related to the renowned S. D. Burman. He was born on December 14, 1940, in Agartala, Tripura, into a family that valued art and literature. He edited Prantik, the first collection of poems from Tripura, which was released in 1962.