Who will be the first female Hindu lawmaker in Pakistan since 1947?

Who will be the first female Hindu lawmaker in Pakistan since 1947?

Please log in or register to vote.
0 votes
answered 05-Sep-2020 by Anonymous User 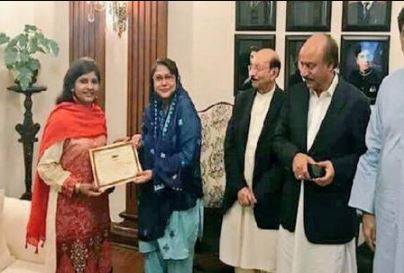 Pakistan's first woman Hindu MP Krishna Kumari Kolhi was sworn in as a member of the Upper House in 2018.. She was among the 51 MPs who took the oath. Kolhi Bilawal Bhutto, a resident of a remote village in Thar's Nagarparkar district in Sindh province, is a member of Zardari's Pakistan People's Party (PPP). Presiding officer Sardar Yakub Khan Nasar administered the oath of office and secrecy to the MPs elected by the federal and provincial assemblies on March 3.

Kolhi was been elected from Sindh from a minority seat. She arrived at the Parliament House with her family in traditional Thar apparel. She told the media that she will work to improve health and solve all the issues, including the issue of water scarcity. Her election is a milestone for the rights of women and minorities in Pakistan. The first PPP had chosen the first Hindu woman, Ratna Bhagwandas Chawla, as MP.
Born in the year 1979 in the house of a poor farmer, Jugnu Kolhi, Krishna Kumari Kolhi, and her family members spent nearly three years in the jail of a zamindar of Kunri in Umerkot district. Krishna was married at the age of 16. At that time she was a ninth-grade student. However, even after marriage, Krishna continued her studies and in 2013, she obtained a Masters's degree in Sociology from Sindh University. She joined the PPP as a social worker along with her brother.