Who was elected as Taiwan's first woman president?

Who was elected as Taiwan's first woman president?

Taiwan’s first female president has vowed to build a new era of politics after sealing a historic landslide election victory that is expected to strain the state’s relationship with China. 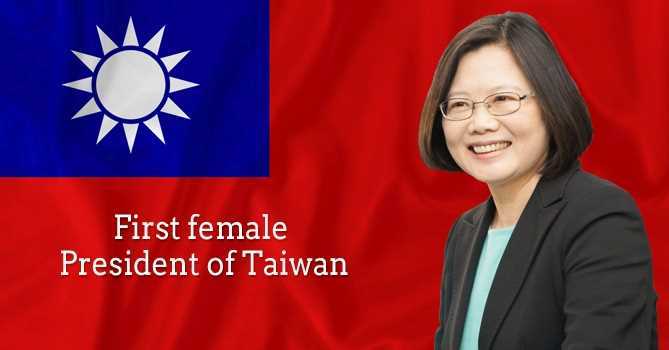 With more than half of the votes counted, the Democratic Progressive party (DPP) candidate, Tsai Ing-wen, had built an unassailable lead over her closest rival, the Nationalist (KMT) candidate, Eric Chu.
“Thank you for helping the DPP stand up again and for trusting us to govern this country,” Tsai, 59, said in her victory address on Saturday night. “We will put political polarisation behind us and look forward to the arrival of a new era of politics in Taiwan.”

Tsai narrowly lost out on the presidency four years ago. The London School of Economics postgraduate had considered a return to academia before deciding to launch a second attempt at Taiwan’s highest office
Analysts have said growing public dissatisfaction with the outgoing KMT president, Ma Ying-jeou, and an economy that weakened dramatically last year, helped propel Tsai to victory. Her success ends eight years of KMT rule, during which there has been an unprecedented thaw in relations between the self-ruled island and China.
Ma, who gained the presidency in 2008, had faced increasing criticism for what critics described as his opaque style of governance and the widespread perception that his pro-China policies had failed to deliver significant economic gains.
His detente with Beijing culminated in a historic cross-strait summit with Xi Jinping last November but critics said the blossoming trade and tourism ties had done little to improve ordinary people’s lives.
“Over the past four years, I’ve travelled around Taiwan, I’ve seen the suffering of the people and I’ve heard the public’s call for change,” Tsai told her final campaign rally on Friday. “Democratic politics is responsible politics, if [a government] cannot do it well, then we change it.”