What is Recombinant DNA Technology?

What is Recombinant DNA Technology?

‘Recombinant DNA’ or rDNA Technology is the process of joining DNA molecules taken from two different sources and inserting that combined DNA into a host body, such that to produce the product usable for humans. Or, we can say, Recombinant DNA is formed in a laboratory by following the methods to bring out a combination of two different genes. 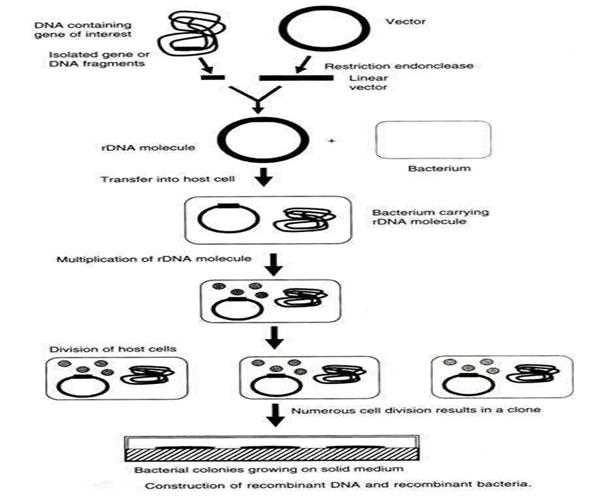 The changes or reformation in DNA is only possible because the DNA molecules share the same molecule structure in all the organisms. Whereas, the change only occurs in the sequence of nucleotide within the overall identical structure. Recombinant DNA molecules are sometimes also referred to as “Chimeric DNA”.
The basic concept of recombining the molecular structure of DNA was given by “Warner Arber”. Due to which the doctors learned about ‘cut’ and ‘paste’ of DNA molecules. Later in 1972, the experiment has been advanced by the “Stanley Cohen” and “Herbert Boyer” to provide the Recombinant DNA Technology.
The Recombinant DNA technology is mainly based on three tools i.e.; Enzymes, Vectors, and Host Organism. These ‘Enzymes’ helps to cut, synthesize, and bind the DNA structure. The ‘Vectors’ carry the required gene and are an important part of recombinant DNA. The ‘Host Organism’ is the cell in which the recombinant DNA will be introduced. The host organism can be Bacteria, Fungi, or an Animal Cell.
To carry out the introduction of newly formed recombinant DNA Vectors into the host organism, different technologies can be used and it includes, Biolistics, Microinjection, Gene Gun, Alternate Cooling and Heating, and Calcium Phosphate ions. The introduction of recombinant DNA into the host organism, this whole process is named as ‘transformation’.
Generally, recombinant DNA technology follows these five steps:
1. By restricting the desired sites cut the DNA,
2. Escalate or Amplify the copies of the gene by using PCR,
3. Now, introduce the genes into the Vectors,
4. Then, transfer the vector genes into the host organism, and
5. Now, you can get the resultant product of recombinant genes.
Add comment
answered 03-May-2019 by Anonymous User