Where is hoover dam and how many turbines are there?

Where is hoover dam and how many turbines are there?

Hoover Dam is constructed in the Black Canyon of the ‘Colorado River’, at the border between the two states Nevada and Arizona of the United States. 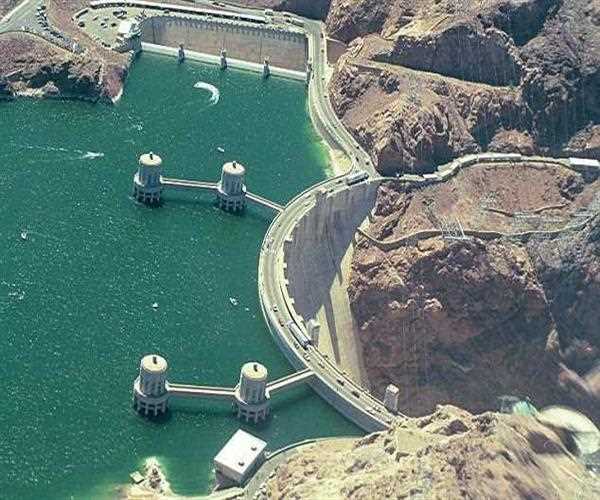 The construction of Hoover Dam was started in the year 1931 and finished its construction in the year 1936. Originally, the dam was named as ‘Boulder Dam’, in 1933, it was officially renamed as Hoover Dam in honor of President Herbert Hoover, in 1947. The dam was built with a massive effort involving thousands of workers, and it costs over one hundred lives.
In Hoover Dam plant there are 17 main turbines. 9 turbines are at the Arizona wing and 8 turbines at the Nevada wing. Between 1986 and 1993, the original turbines were replaced under the upgradation program of the dam. The maximum capacity of the plant is about 2,080 megawatts. The purpose fulfilled by constructing such a massive dam is the production of power, flood control, storage of water, regulation, and recreation.
The maximum height of the dam is 726.4 ft. (221.4 m) and length is 1,244 ft. (379 m). The volume of the dam is 3,250,000 cubic yd. (2, 480, 000 m3). The average Annual Net power generation of Hoover Plant is about 4.2 Billion Kilowatt per hour. The power plant is maintained and operated by the ‘Bureau of Reclamation’. The structure of the dam was built by ‘Six Companies, Inc.’ whereas, the Exterior was done by ‘Gordon Kaufmann’. The Architectural Design was done by ‘Art Deco’.
The dam produces energy by using Hydroelectricity method. Hydroelectric power is a clean and renewable source of energy. It doesn’t cause any type of air pollution, chemical runoff, or toxic waste. The generated energy is allocated to 15 different nearby cities at different ratios. As well as, the construction of the dam was so huge that it requires about 50 principal contractors and it helps the construction work to be two years ahead of schedule.
Add comment
answered 30-Apr-2019 by Anonymous User